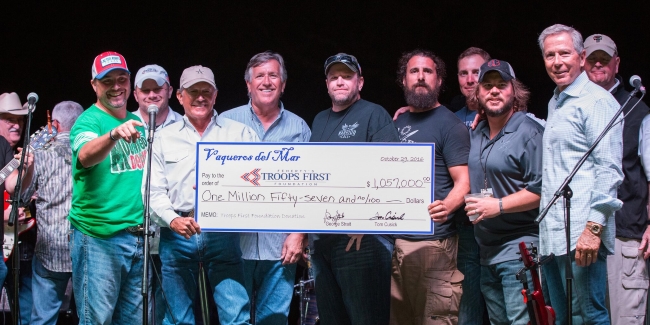 "We can never repay our military veterans for their dedicated service, but we hope our partnership with the Troops First Foundation can show how much we appreciate them," said George Strait. "This marks our sixth year of supporting the wounded men and women who have served our country, and we are thrilled to have raised over $1 million, breaking last year's record."

The four-day celebration culminated with a golf "shootout" and a surprise appearance by PGA TOUR player, former world number one in the World Golf Rankings, and Time magazine's "100 Most Influential People" (2016), Jordan Spieth. A live auction emceed by Strait and Cusick followed an incredible jam session starring the country music legend, with dinner and dancing. George Strait, Jamey Johnson, and Keith Gattis then wrapped up the event by serenading the more than 300 guests with many of their favorite songs.

About Feherty's Troops First Foundation
David Feherty and Rick Kell founded the non-profit organization in August 2008 to provide assistance to soldiers who have been wounded in combat. With unduplicated relevance as a core principle, Feherty and Kell have created several programs and specialized events designed for wounded soldiers and their families that address relationship building, mentoring, reintegration and looking forward. For more information, visit www.troopsfirstfoundation.org.